The karst complex of Ojo Guareña is, with more than 100 kilometers of development, one of the most extensive sets of caves in the Iberian Peninsula and can be included among the ten largest in the world. In addition to possessing an undeniable speleological interest, several prehistoric sanctuaries and archaeological remains have been found inside, such as weapons, ceramics, bones, and even footprints of barefoot human feet and numerous species of cave-dwelling invertebrates.

Cave and hermitage of San Bernabé

The visit to the cave of San Bernabé, is a route of approximately 400 meters of gallery and the hermitage of San Tirso and San Bernabé excavated at the entrance of the cave. The visit to its interior intends to be an approach to the rest of the karst complex of Ojo Guareña, where the result of the Kárstico modeling can be observed, consisting of the dissolution of the calcareous rock by the action of the water during millions of years.

To the right of the entrance to the Cave is the Hall of the Town Hall. It is currently used in representative events and the day of the Pilgrimage.

During the course of the cave, a 10-minute projection is presented. In its interior we can see the Pila del Santo, the gallery of the Silos and the hermitage dedicated to San Tirso, although it is really known by San Bernabé. The hermitage has anonymous wall paintings dating from 1705 and 1877, which relate the martyrdoms and miracles of the Saint. 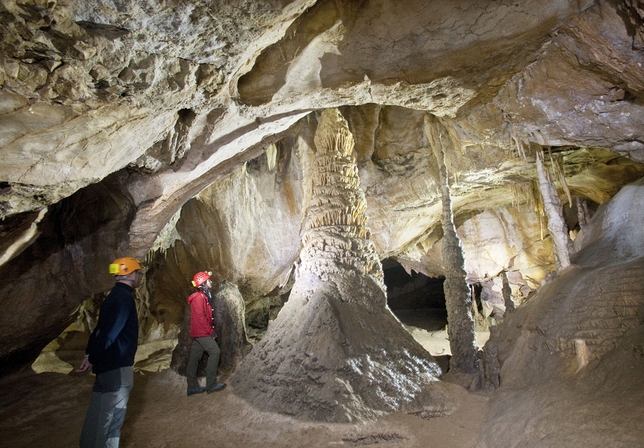 The cave and Rampa de Palomera and its continuation to the Wax Museum and the Cacique Room, due to its easy access and the presence of numerous elements of interest, have enough characteristics for its value. There is the possibility of making several tours of different duration and intended for a diverse public. Due to the characteristics of the cavity, it is oriented to a tourism of nature and culture, with a certain component of adventure. The visits, of reduced frequency, will be guided and with a limited number of visitors, approximately 20, having to guarantee the adequate protection of the underground and existing values on the surface.

The sale of tickets to visit the Cave-hermitage of San Bernabé and the Palomera Cave, can be done through the following web: